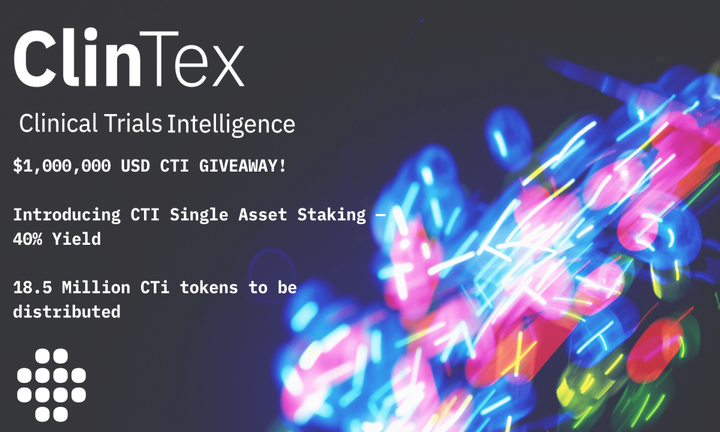 ClinTex To Give Away 1 Million USD In CTi Tokens Through Staking With Up To 40% Yield In Rewards.

ClinTex and their Clinical Trials Intelligence (CTi) platform are bridging the pharma and crypto industries, providing predictive analytics, machine learning, and blockchain implementation in clinical trials. The CTi platform is empowered by the native CTi token which serves as a gateway for entering the platform via a staking license model.

After a very successful private sale, Clintex announced the listing of their native token on one of the largest crypto exchanges, KuCoin, in December 2020. Since the listing announcement, the token had several surge episodes because of the token`s supporters. As a thank you gift to all CTi hodlers, a staking event starting on 1st April will enable participants to split a reward pool of $1 million, paid in CTi tokens.

The 20 million CTi rewards will be distributed via a Web3 app, and the staking event will be open even to new token holders. To purchase tokens, you can go to KuCoin`s platform and then go directly to Clintex`s staking webpage and follow the steps to join.

On top of that, there is an additional earning opportunity, called Compound staking. Users can compound their tokens and earn rewards on both the initial amount and the first reward.

For example, if CTi holders decide to stake 1,000 tokens in a three-month staking contract, they would earn a total of 1,210 CTi. However, if they decide to compound the 1,210 CTi tokens for a 30-day staking period, the total amount of earnings would become 1,283 CTi tokens.

Between $600,000-$8,000,000 is the average daily spend on clinical trials. The high costs and long periods needed to get new medicines through all trial stages (2 to 4 years on average) prevent patients from receiving the medicines that they need. This has never been more relevant than now, with COVID-19 increasing its death toll every day.

The CTi token distribution is a way for Clintex`s team to thank the community which believes that the ClinTex platform is the way for revolutionizing the realm of clinical trials and medicines development. The implementation of blockchain technology in the pharmaceutical industry would ultimately cut down the costs for research, development, and trialing for present and new drugs.

The Thank you gift for CTi holders is scheduled to run for six months – from April 1 to September 30, 2021, when the public launch of the first CTi app (CTi-OEM) is about to happen.